There was an great article in Wired Magazine about a week ago about Amazon’s CamperForce. If you’ve never heard of it, it’s the official designation (really) for the army of retired folk in RVs who travel the country for seasonal work at Amazon Fulfillment Centers around the country.

It’s an amazing thing. Amazon recruits at campsites around the country. Retired folk get 3 months or more of more than full-time employment (there’s tons of overtime if anyone wants it), Amazon gives out a lot of freebies (including ibruprofen), and Amazon gets a mature work force that is diligent and responsible. 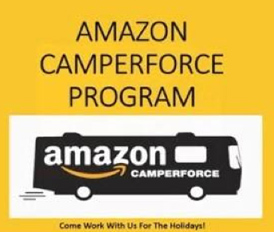 It’s a fascinating read about two subcultures – RVers and CamperForce. What jumped out at me, though, was the story within the story, the story of the two main protagonists, Chuck and Barb. Chuck and Barb had a nice condo in Myrtle Beach, a business, and were enjoying life before the Recession hit. They lost their retirement funds in 2008 courtesy of Wells Fargo, the business – adventure tours – tanked with the economy. They tried for four years to pay their credit cards, mortgage, and bills, pouring everything into a vain effort to save their condo and salvage their credit scores.

They lost everything, sold their possessions,  Barb’s brother sold them a 29-foot 1996 National RV Sea Breeze motor home for $500. It had a dead generator, dry-rotted tires, and a leak in the gas line. They got it up and running, barely, it leaked everywhere in heavy rain. They wandered the country surviving on Chuck’s (early) social security payments and odd jobs. Amazon’s CamperForce was a godsend.

Somewhere along the line Chuck and Barb ran into a couple of other RVers, also on the road because of the the

Recession. Their new friends were fairly new to the road too. They were about to join the CamperForce for the first time, though their needs were nowhere near those of Chuck and Barb. They had a state-of-the-art RV and threw great cookouts.

The two couples were roughly the same ages. They both lost their houses to the Recession. But, here’s the difference between them – the thing that struck me so hard – Chuck and Barb’s friends walked away from their house in Oregon. When the value of their home tanked well below the amount they owed, they did the math, assessed their other assets and debts and walked. No years and every penny they had to save the house when they knew they didn’t have the assets, equity, and income to do more than tread water until the inevitable occurred.

It is the perfect example of something I’ve been preaching for a long time now, something I write about extensively in my book – you can plan before and during a foreclosure. Nothing is written in stone as long as you explore all the options. Nothing.